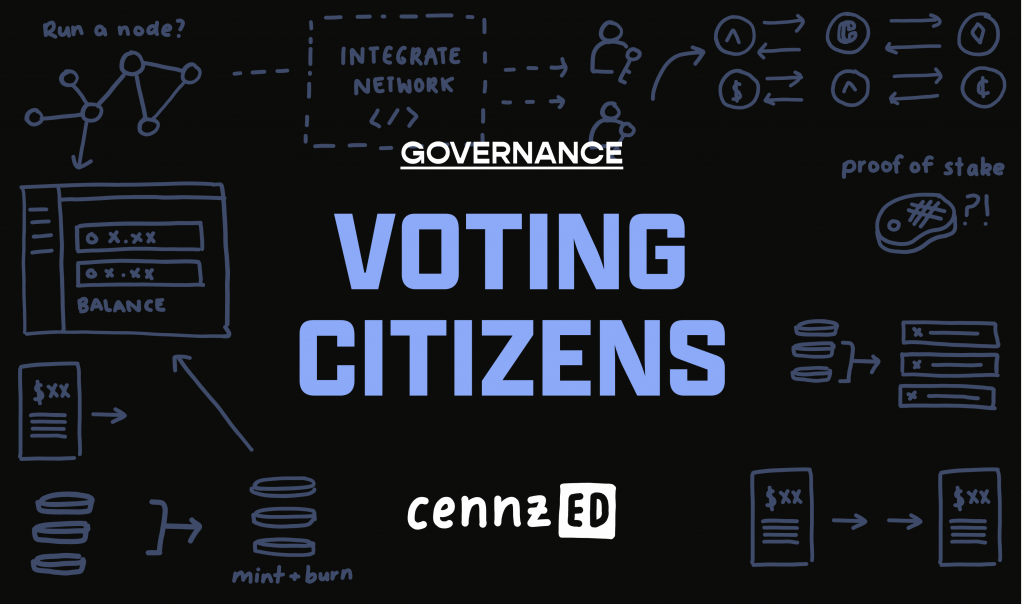 There are two key roles in the CENNZnet governance process, councillors and voting citizens. This article will focus on the role of voting citizens, what they are responsible for, how to register as a citizen and how the voting process works.

What are voting citizens in CENNZnet governance?

Everyone in our token holder community can register themselves as a voting citizen and take part in governance. Voting citizens help shape the final decision on all proposals put to vote and can veto a referendum before it is enacted.

What do voting citizens do?

One of the most significant steps in the CENNZnet governance process is the referendum by voting citizens. At this stage, a proposal that has been approved by the elected council is passed to a referendum vote by the wider CENNZnet community.

It is the voting citizen’s job to have the final say over whether a proposal will be good for the network or not. Citizens must cast their votes wisely to protect the network.

How to register as a voting citizen

Registering to become a voting citizen requires a basic identity verification using a function called the identity module. The identity module ensures that every one vote is linked to one authentic identity. This is essential for creating a fair and transparent voting system that includes all our token holders. This process will mean that voters won’t be completely anonymous. However, it does not require voters to give away private information, it will simply establish enough friction to prevent individuals from registering as multiple voters.

Any token holder who wishes to be involved in the CENNZnet voting procedure will need to first use the identity module to prove they are a real person.

The identity module will require the following information to determine token holder identity:

It’s also important to note that this process, as with anything on the CENNZnet chain, can be altered and changed by subsequent decisions made using the governance model.

Verify your identity and become a voting citizen here: https://gov.cennz.net/identity/connect

How does the voting process work?

Voting citizens have a 30-hour referendum time frame. This means that all votes on the referendum must be made within 30 hours, after this time the voting will close.

The wallet used connect to the Identity Module is used both to check voting eligibility (staking requirement) as well as your voting power (how much you have staked). Most people will have all their CENNZ staked from a single wallet, but those who spread out their staking over multiple wallets will have to register each wallet with the identity multiple and do votes for every wallet to use all their potential voting power.

Votes will take place on the CENNZnet Governance Discord channel. Voting announcements and updates on how proposals are progressing will be made there.