The best use cases for DApps 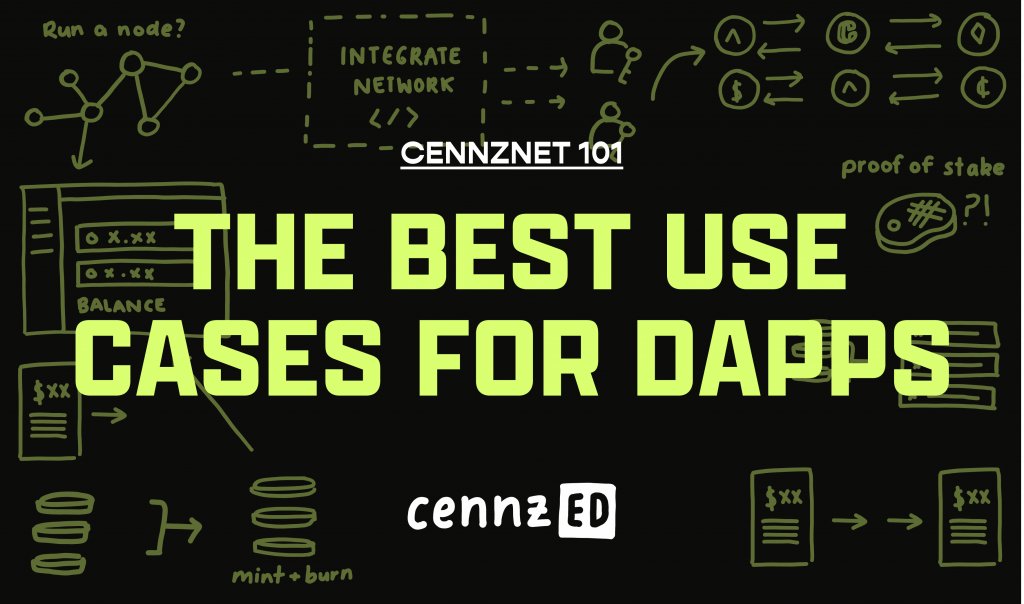 Since the birth of the app store in the heady days of 2008, the possibilities for device-based computer programs have evolved faster than anyone predicted. And things are about to get even more exciting when you add in the increased potential of blockchains!

As we move into the third generation of blockchain, the possibilities for apps with an element of decentralisation have skyrocketed. So what exactly are decentralised apps (DApps) and importantly, what advantages and use cases do they offer?

What are DApps? (spoiler: they’re not really that different to apps)

Let’s start with a quick clarification, DApps are not that different to apps. In fact, in a lot of cases, they are pretty much the same in terms of purpose and functionality.

DApps are simply a type of application that connects to a blockchain in some way. Theoretically, this could mean the entire backend storage is done on a blockchain rather than a server; but more typically it involves just a small component of the app connecting to the blockchain through a straightforward API.

To give you a better idea, pretty much all current DApps run the majority of their components off-chain. Even UniSwap, which refers to itself as a fully decentralised finance protocol, still has some elements running off-chain.

So why use the blockchain at all?

If DApps aren’t really that different to your standard apps, then why use the blockchain at all? It’s a bit like asking why you would connect your app to another API – basically because it offers more functionality and benefits for your app.

So what are the key benefits of connecting to the blockchain?

The biggest benefit of involving a blockchain in your app is that it codes in process integrity. What does this mean exactly? Well, most processes, however closely monitored, contain some element of trust. We have to trust that the parties involved have followed the required protocol correctly. For example, when someone sells a house we need to trust that they own the house to start with. Lawyers can attempt to verify this by checking deeds and other documents but we still have to trust they get their checks right or that the documents haven’t been very well forged.

On a blockchain, any required regulation and compliance can be hardcoded in. To put information on-chain or to interact with that information, you must follow the blockchain’s protocol. If protocol is not followed then the changes to the information will not be finalised into a block and so won’t be recorded on the chain. For example, blockchain protocol dictates that you can’t transfer or spend more tokens than you have in your wallet. Before you try to complete any action on the chain, such as transferring tokens, the blockchain checks the action against protocol. If you don’t have enough tokens in your wallet, the action will register as breaking protocol and so will not be completed. This makes it impossible to forge ownership or dishonestly alter information.

One of the parallel benefits of verifiable process authenticity is the resulting efficiency of processes on a blockchain. With programmed in compliance there is no need for external regulators and systems to monitor processes. All the middlemen (such as lawyers, fraud checkers or accountants) can effectively be cut out as all parties involved in any process can easily verify that procedure has been correctly followed. Not only does this reduce the time it takes for the process to be completed, it also dramatically reduces the cost.

Blockchains are exceptionally secure. The block-based architecture is near impossible to hack. Alongside this, cutting out middlemen from blockchain processes means there is less shared data to lose as fewer elements are being shared with separate parties off-chain.

4. Become part of an ecosystem

When you connect to a blockchain you become part of that chain’s DApp ecosystem. This allows DApp creators and users to share features such as NFT marketplaces and innovations built by other devs on the chain. This community access gives DApps more mindshare, feature visibility and an increased pool of users. The open source nature of CENNZnet and our on-chain governance structure also means that you can contribute to the quality and direction of the network.

If you believe that crypto is the way the world is going, it’s important to build it into your systems now. This will make it easier for your architecture in the future and also put you ahead of the pack.

What processes could you harness blockchain for in your DApp?

The blockchain essentially provides a shared database between multiple parties. The huge advantage of this is that you can have a shared logic that is run trustlessly. This means if you have any activities that involve multiple parties and want to increase the transparency and security of these processes then it’s probably better on the blockchain.

With this in mind, there are a few key functionalities that blockchain really compliments. These could be the objective of an entire application, or simply elements of a broader app.

Voting & governance: Blockchain provides a secure and transparent system on which to hold voting. The decentralised nature of blockchain means that all parties can verify that there is no single point of governance, ie. a central entity determining the result of a vote. This is a real opportunity for all sorts of organisations. For example the bylaws for shareholders in a company/organisation can be coded into the system detailing exactly who has power in what situation and who is able to vote on what. This would make it structurally impossible to break legal precedent.

Within gaming or other online communities, blockchain voting or governance systems can help to build and maintain a platform that everyone is happy with. For example holding secure, trusteless votes on key development decisions that will change the platform ensures that everyone has their voice heard and the community can transparently see why a development was made.

Finance: Decentralised finance is already a popular use of blockchain technology. Blockchain provides the security, efficiency and transparency required by financial organisations to make financial processes more accessible. The possibilities of programmable money are quite literally endless at this point. For example money that can be transferred to another party but only programmed to be spent at a specific shop or on specific items.

Games: There is lots of exciting potential in this space. Blockchain functionality in games allows the gaming community to have total transparency over item sales, preventing incidents like pay to win. It also allows for item sales and representation outside of the game itself. So items could potentially be traded between games. Blockchain can also be a significant contributor to fairness within the gaming community. Games could start putting some of the rules in the blockchain, making them provably fair. For example loot crates that get their “dice” rolled on the blockchain, so no one could cheat it.

What should you try and avoid?

Blockchain is still very much in its early days, so the world is your oyster! There is so much possibility out there and next to no saturation in any given area.

That being said, we have one key piece of advice – whatever you do, keep the value on the chain. This means that where possible all the information you put on the chain should pertain to events and value in the digital world. For example game items, cryptocurrencies or digital art.

The simple reason for this is that it’s very tricky to integrate blockchain with the real world at this point in time. To do it properly requires the support of large centralised authorities, most of which are not yet willing to move into this advanced area of technology. Without the support of these organisations, there is no true way to trust that the information on the chain is really representative of the real-world item it is meant to symbolise. For example, if you mint an NFT symbolising ownership of a house, it’s only worth something if the legal institutions involved in the sale of property and land accept the NFT as a demarcation of ownership. And even then the minting of said NFT would have to be authenticated and approved by these official channels. Without these real-world institutions’ involvement, people are free to put ‘real-world’ information on the chain that holds no real-world value at all, meaning you could no longer trust the information on the chain – garbage in, garbage out.

DApps can certainly sound like a daunting new skillset, but with the right tools adding a pinch of blockchain to your app is not only straightforward but hugely rewarding.

Here at CENNZnet we have developed a new way of building on our chain so that DApp devs can get stuck in fast without learning new programming languages and smart contract development.

To build a DApp with CENNZnet all you need to do is:

Get started on your DApp and make the most of a third-generation blockchain ecosystem here!